Since this guide was written many years ago, I have spent 100s of hours learning about and testing all the Room Correction solutions as a way to create my perfect dedicated Home Cinema. While I have achieved that goal – and then some, I really wish for others to be able to do the same. The first fruit of this labour is YPAO – The Lost Manual. If you have a Yamaha receiver, you need this guide!

Regardless, the below article is still relevant and I sincerely hope it will help you on your way to Home Cinema Nirvana. Yours truly. Roland

I have been around to a friend recently who just bought the latest and greatest Avantage Receiver from Yamaha and AU$5000 worth of speakers but didn’t bother to read the manual in how to set up the receiver correctly.

Good sound is dependent just as much on doing the setup correctly, than it is on buying great gear. I was shocked and horrified to learn that after spending almost AU$10K on his setup, he didn’t bother to go through the expert setup procedure, he simply placed the mic on the couch (a big no no), measured one microphone position and off he went. Then he complained to me that the system sounded like $h1t, pardon my French! Of course it did…

However, after fixing his setup, I realised many people do the same, so it’s time for showing you how to do Yamaha YPAO – and actually most other home cinema receiver – setup correctly. Some of the advice below can be applied generally to all receivers. I will highlight Yamaha YPAO only advice here.

Before anything else, you should go into the Manual Setup section under Speaker Setup and set the amp assignment correctly, dependent on which speaker terminals you used for which speakers and whether you used external amplification. You will need to refer to your receiver’s user manual as it does differ dependent on the the make and model of your receiver, even if we only look at Yamaha Receivers.

Firstly, auto setup should be configured as follows:

Have a look at the diagram below which you can find variations of in Yamaha documentation. The below is the correct version with number 1 position being in the centre of the couch (or chair). Some versions of this diagram were incorrectly putting number 1 on the side of the couch. 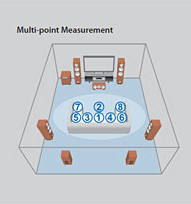 However, this is where it ends for me. I usually do the following, which seems to work with YPAO and other receivers as well:

If you were configuring one seating position, a chair or arm chair, do the above exactly but divide up the chair equally or do some positions to the left and right of the chair at ear height as well as just a bit in front and above ear height.

If you have multiple couches, I recommend, doing more positions on the couch that will be your primary listening position and doing the rest on the other couch(es) following the above principles.

YPAO in higher end Yamaha receivers will allow you to do something called an angle measurement. You will have to do this in Position 1 above, but use the little boomerang that came with your receiver like the one below. 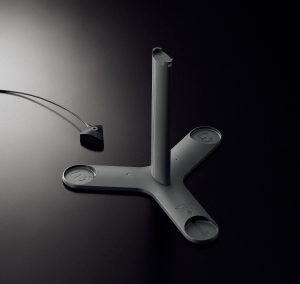 The positions are marked. Position 1 on the boomerang must face towards your front speakers, while 2 and 3 towards the back. The boomerang can be fixed onto a tripod as well. I really recommend this. Otherwise the taping method works here as well.

Measure each position by following the on-screen guidance. Please note that the height position is only available on Atmos and DTS X receivers.

Once YPAO (or other Receiver config) has finished, check the following:

Even though your speakers may be able to do frequencies below 80hz, it is not recommended to go below this cross over for movies as those frequencies are hard to control even from the subwoofer alone. However, your milage may vary. If you don’t have a separate subwoofer EQ, but only using the Yamaha, you may want to leave crossovers below 80Hz or leave speakers as “large” so no crossover is applied to them. As a rule of thumb, if Yamaha configured your speakers with a high crossover, you should not lower it (e.g. from 100Hz to 80hz), you can however up the crossover frequency (e.g. from 60hz to 80hz).

The reason you should not lower crossover frequencies is because the setup routine determined that anything lower than the crossover frequency doesn’t reach the seating positions without major dips (-3dB which is 1/2 of the percieved volume) in frequency response. If you lower the crossover, you may still get an uneven response or may not hear certain frequencies at all as now the subwoofer is not playing them back either.

If the crossover set is much higher than you know the speakers can reproduce, you may want to repeat the setup routine paying attention to mic placement. If they still come up short, think about aiming the speakers with the woofers pointing at the main listening positions.

The equaliser on Yamaha receivers can be set to the following:

The only major issue I see with Yamaha receivers – or most receivers that don’t have Audyssey – is that they don’t variate surround speaker volume levels dependent on volume. When listening to surround programs at lower volume levels, the surround and surround back speaker volumes might need to be increased in certain setups to maintain the same surround envelopment. I have heard different views on this but it seems to me like those that have their surround speakers at ear height seem to have less trouble with this than those who have them somewhat higher than ear height or further away than the front speakers.

I believe both Audyssey and Dolby researched this and found it to be true, however. I find the same when listening in my home cinema where the surround speakers are somewhat higher than my front speakers while my presence speakers are on a third plane altogether near the ceilings. I normally increase surround and surround back channels by 1-2 dB dependent on how loud someone is listening to the system in general. You could even design a reference setting and a low volume setting turning this and other features on and off. On Yamaha you can do this using something called “Scenes”.

Give me feedback in the comments below and let me know how you go! Happy Listening!

Since this guide was written many years ago, I have spent 100s of hours learning about and testing all the Room Correction solutions as a way to create my perfect dedicated Home Cinema. While I have achieved that goal – and then some, I really wish for others to be able to do the same. The first fruit of this labour is YPAO – The Lost Manual. If you have a Yamaha receiver, you need this guide!

Regardless, the above article is still relevant and I sincerely hope it will help you on your way to Home Cinema Nirvana. Yours truly. Roland

PS. If you need independent advice, because you’re embarking on a new home cinema build or changes to your existing one, please see my availability here.